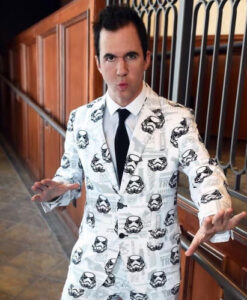 TV Stevie’s Party on the Patio moves to Saturday night this week because we have a very special guest.

Hit Nashville songwriter JT Harding joins Stephen for the first hour of his Party on the Patio.

JT, raised in Grosse Pointe Michigan, has become one of Nashville’s premier songwriters with hits such as Kenny Chesney’s “Somewhere With You” and “Bar at the End of the World”, Blake Shelton’s “Sangria” , Dirks Bentley’s “It’s Different for Girls” and Uncle Kracker’s “Smile”.

He even spent a day riding around in a car with Keith Urban before co-writing “Somewhere in My Car”.

JT is a popular and highly sought-after performer who weaves the stories behind the songs into a narrative of his own remarkable career. In fact, he’s authored an autobiography entitled “Party Like a Rock Star”, which he’ll have available at the Island House.

You don’t want to miss this as JT and Stephen trade stories and songs…you’ll be talking about it for years. And its FREE!!!